The Construction Workplace Misclassification Act (Act 72) went into effect in Pennsylvania in 2011 and sets guidelines for classification of independent contractors in the construction industry. In recent years, the Pennsylvania Department of Labor and Industry (DLI) has significantly increased its enforcement of the Act. Since 2015, DLI has fined more than 700 contractors for Act 72 violations and has collected more than $1.5 million in fines, according to its 2019 report.

Act 72 sets forth a checklist of considerations that are scrutinized when determining if a laborer on a project is considered an “independent contractor.” If an employee is misclassified as an independent contractor, DLI will levy a fine and, in some instances, seek criminal prosecutions. In recent years, increased enforcement and penalties under Act 72 have caused much confusion and widespread reevaluation of business practices.

For the first few years after it went into effect, most employers in the construction industry saw the statute as straightforward and benign. In 2018, the most recent reporting year, the Bureau of Labor Law Compliance conducted 419 on-site investigations, initiated 182 case files, and collected $566,845. This is a remarkable increase from the first four years of Act 72, which collected a total of $15,200. The recent trend demonstrates a significant emphasis to investigate and prosecute leads that DLI receives from complaints made by laborers, findings during construction site visits, and, most significantly, referrals from other government agencies. 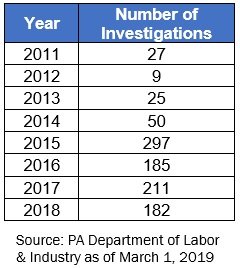 According to data from the 2019 report produced by DLI on the administration and enforcement of Act 72, case files and fines have sharply increased in the past few years, and it is anticipated that these numbers will rise. DLI has increased the number of site visits and is receiving increased referrals of cases from the Office of Unemployment Compensation Tax Services. Additionally, DLI indicates in the report that it plans to increase collaboration with additional government agencies for referrals, notably the Bureau of Workers’ Compensation and the U.S. Department of Labor. 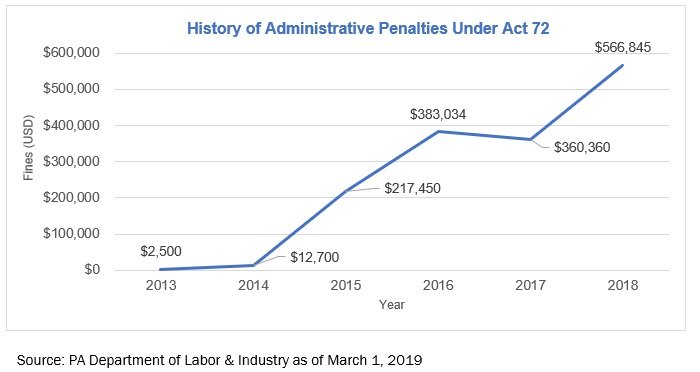 Don’t trip into the misclassification pit

Act 72 applies to all construction companies working on all types of projects—public, private, residential or commercial. To comply, every independent contractor must have a written contract in place. Further, each relationship must be analyzed to ensure that the subcontractor is truly an independent contractor that controls its own work and the pricing structure.

There are numerous other criteria that must be met, such as insurance and other factors that are similar to the traditional independent contractor factors used by the Internal Revenue Service (IRS). Importantly, due to the increased amount of investigations and fines, it is advisable to seek counsel in evaluating your current practices and consider revised contract language or processes to minimize exposure.

Saxton & Stump attorneys Jeff Bright, Ron Pollock and Ashley Weber are available to discuss how our Construction Law Group can advise and assist on best practices for contracting and defending enforcement actions brought by DLI.

Jeff Bright recently presented on this topic at ABC Keystone’s “Employee and Contractor Compliance Concerns and Best Practices” training. Saxton & Stump is a proud supporter of ABC Keystone’s initiatives to provide education and advance the construction industry. You can also find Jeff’s most recent article “Typical Growing Pains that Contractors (of All Sizes) Experience” in the January 2020 edition of ABC Keystone’s The Merit Shop Spokesman newsletter.