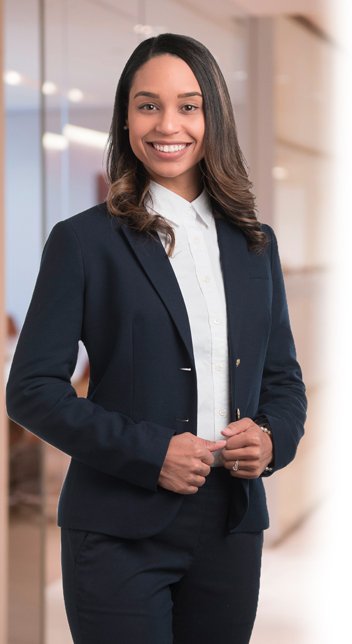 Kiandra D. Steffy, Esq. practices in the firm’s Labor and Employment, Title IX and Commercial Litigation groups as well as the Internal Investigations group. She has experience with state and federal employment law and provides representation in employment litigation matters where she assists employers in the investigation of allegations of discrimination, harassment and other types of workplace misconduct. Kiandra also represents higher education entities with regard to Title IX matters.

Kiandra is an active member of the Lancaster community and has served in many leadership roles. She is currently Director at Large for the Lancaster Bar Association’s Board of Director and also serves as Chair of the Diversity Committee whose role is to strengthen and expand the LBA’s commitment to diversity and inclusion within the Lancaster legal community. She also currently serves as a Board Member for The LINK Foundation which provides monetary grants to local non-profit organizations.

The National Black Lawyers Top 40 Under 40

The New School of Lancaster, Board of Trustees

The LINK Foundation, Board Member

Girls on the Run of Lancaster, Past Chair of the Junior Board of Directors

Drafted a Clemency Petition which was submitted to the 44th President of the United States   of America, Barack Obama, seeking clemency for an indigent federal inmate. In October   2016 Clemency Petition was granted by President Obama and client’s prison sentence was commuted (pro bono)

Represented school districts, charter schools and other providers of educational services on matters involving student and faculty rights and compliance with federal and state education laws

Represented the City of Philadelphia in trial and appellate tax cases