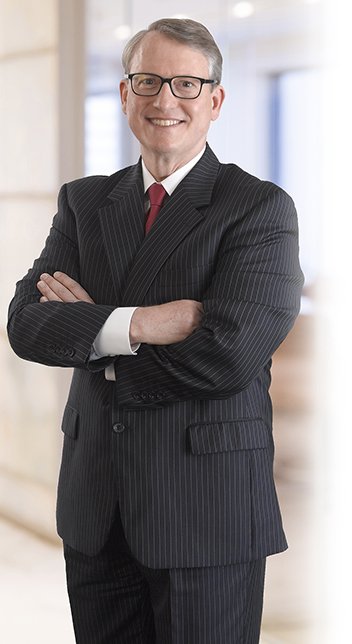 Christopher A. Stump, Esq. is the Co-founder of Saxton & Stump. He concentrates his practice in the representation of hospitals, doctors, and healthcare professionals in all areas of healthcare litigation, including malpractice defense, coverage issues, medical device litigation, product liability and risk management. He actively tries cases in courts throughout Pennsylvania and has taken more than 100 cases to verdict through trial and arbitration or appeal.

Chris has defended healthcare providers throughout his career, including being appointed as lead counsel for a healthcare system in a significant cohort of cases involving corporate negligence, medical device products liability and wrongful death claims in the investigation of a newly-recognized infectious phenomena, nontuberculous mycobacteria (NTM) from heater-cooler devices used during certain open-heart surgeries. Considered highly knowledgeable in NTM infection cases throughout the country, Chris led a team of attorneys in the representation of a central Pennsylvania-based hospital during the investigation in which they were the first to report a cluster of patients with possible NTM infections, notify the Department of Health and CDC and inform all patients of possible infection. More than 20 lawsuits were filed beginning in 2015, which required a tremendous amount of e-discovery and that Chris’ team conduct depositions throughout North America and Europe. This matter remains open and ongoing.

Chris serves as Co-chair of the Healthcare Litigation and Mitigation group, where he leverages his extensive experience defending claims in federal and state courts and works closely with a team of consultants who have backgrounds in nursing, patient safety and infection control. Prior to starting Saxton & Stump, he was a Shareholder in the Healthcare Litigation and Risk Management Group at Stevens & Lee for 17 years. Prior to that, Chris served as a law clerk for the Honorable Rebecca Beach Smith at the U.S. District Court of the Eastern District of Virginia. While in law school, he was a member of the McNeil Law Society, the Law Review and the Moot Court.

Chris is very involved with the community, having volunteered his expertise with many organizations. He is the former Board Chair for Hospice and Community Care and was previously the Co-Chair of the Capital Campaign, which raised over $3.8 million to build Pennsylvania’s first free-standing inpatient Hospice Care Center. Chris also formerly served on the Board of Trustees and as Chair for the Moravian Manor.