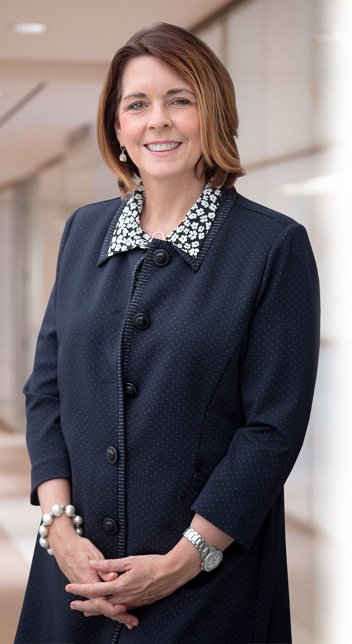 Kathleen Duffy Bruder, Esq. is a registered Pennsylvania lobbyist and practicing attorney who chairs Saxton & Stump’s Regulatory and Government Affairs team. She is passionate about helping clients navigate challenges and opportunities that involve all levels of government and connecting clients to government decision makers. With more than 25 years of experience as both a litigator and lobbyist, she has an extensive network of contacts and the knowledge necessary to develop strategies with clients and influence decision makers in the federal, state and local government and within the three branches. Kathy’s experience allows her to advocate for clients with nearly any matter involving government including operations, organizational structures, regulatory and legislative processes as well as administrative bodies and rules.

In her Regulatory and Government Affairs practice, Kathy works with public and private sector clients to create a roadmap to reach their goals. She primarily practices in Harrisburg, PA with close proximity to the Commonwealth’s Capitol. The Regulatory and Government Affairs team’s relationships in federal, state and local government provide clients the ability to message their interests for legislative or policy changes or to seek state funding for economic development purposes.

Kathy served as former Gov. Tom Corbett’s Deputy Chief of Staff from 2011 to 2015. In that role, she was a trusted advisor to the governor and his cabinet. She served as the governor’s liaison for all state-wide management personnel positions and was the governor’s point of contact for numerous state agencies for policy, legislative and press initiatives. Kathy also worked on the governor’s behalf with contacts in local and federal governments as well as numerous state and regional boards and commissions, including the Pennsylvania and New Jersey bi-state transportation authorities, the Pennsylvania Turnpike Commission and the Pennsylvania Convention Center Authority. Further, she served with the governor as vice chair of Team Pennsylvania, a nonprofit that connects business and industry leaders and facilitates partnerships to support economic development and prosperity in the commonwealth.

Prior to joining Saxton & Stump, Kathy was an attorney for a Harrisburg-based law firm where she helped build a government relations practice. In that role, Kathy and her team represented clients in diverse subject areas including horse racing, energy and environmental, oil and natural gas, finance transportation infrastructure and code enforcement. Before joining the governor’s office, she was a partner at Rhoads & Sinon LLP for 10 years where she focused her practice in litigation and representing businesses in labor and employment matters. She also previously served the City of Harrisburg’s Mayor Stephen R. Reed as a cabinet member in the roles of deputy solicitor, labor attorney and director of human resources for approximately four years.

Kathy is frequently invited to present for private and public clients and associations state-wide on topics subjects such as government relations, budget and politics.

University of Scranton, B.S. in Economics and Finance, 1990

U.S District Court for the District of New Jersey

University of Scranton Alumni Board of Governors (2003-2005)

Special Deputy Secretary of the Pennsylvania Department of Public Welfare, 2014

Award for Distinguished Public Service from the City of Harrisburg’s Mayor, 1999

This week in Pennsylvania on criminal justice reform and presidential election 2020, ABC 27. (September 15, 2019)

PA schools need to make the most of safety grants, Pittsburgh Post-Gazette. (October 14, 2018)

Kathy helped numerous clients in diverse business industries obtain approval and a waiver from Gov. Wolf’s shutdown orders amid the COVID-19 pandemic. Her ability to learn information from government leaders and her counsel also helped clients and their employees understand real time expectations of Pennsylvania state government and know how to operate in a safe manner and in cooperation with law enforcement

Lobbied to either amend, pass or oppose legislation for clients that would impact the client’s business goals; Kathy’s efforts and guidance supports clients’ business timeline and budgets

Worked with clients to achieve state funding for economic development initiatives – awards ranged from nearly $750,000 to over $2 million for specific projects

Navigates government agencies in the federal, state and local sectors so the client has immediate access to key decision-makers